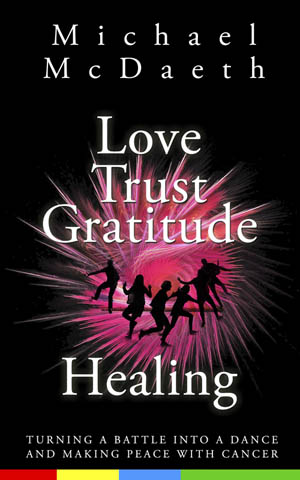 Love Trust Gratitude Healing: Turning a Battle into a Dance and making Peace with Cancer

One morning a couple years ago I woke to find I had lost my ability to walk overnight. If that shock wasn’t enough it was discovered that there was a tumor on my spine caused by an incurable cancer called multiple myeloma. Over the next year I endured radiation, chemo and a bone marrow transplant all while learning to walk again.

This incredibly difficult journey led me to many positive revelations which I believe were the result of choosing dance as the metaphor in response to my cancer instead of the default response of war. Though it may sound heroic to cast us as warriors in a battle it doesn’t reveal much about the struggle and it reduces the experience to win or lose. My mission with Love Trust Gratitude Healing: Turning a Battle into a Dance and making Peace with Cancer is share my life and experience and open up the conversation on cancer, to inspire people to change the words they use around cancer in recognizing that this major life confrontation like all confrontations is contingent on the quality of our response. We can heal emotionally and spiritually even if we may be struggling physically. A meaningful life is not measured in years. 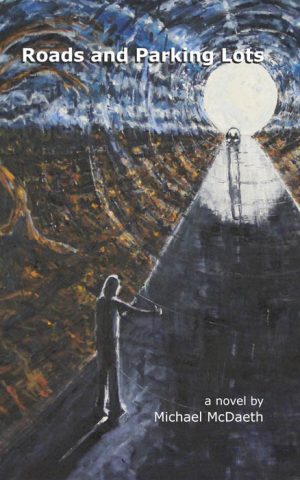 ROADS AND PARKING LOTS is Michael McDaeth’s fictionalized memoir of growing up on a homestead, which he calls the mini-ranch, in Northern Minnesota under the thumb of his overbearing dad he is convinced has a demon inside of him. The story begins in 1980 when Mick returns to the mini-ranch after failing to hitchhike his way to a new life somewhere far away. Mick parties with his friends, gives hitchhiking another try and eventually moves to Minneapolis where more trouble awaits him. Mick tries to make the best of things with a generous portion of dark humor in cold cruel 80’s.

Michael McDaeth delivers with a well written and poetically fast paced tale entitled, Roads and Parking Lots.  Immediately you are introduced to the clever and witty protagonist, Mick, who is your normal everyday average guy who just can’t seem to take anything seriously.  He finds himself in middle America 1980’s and takes us on a long ride through the years of his youth that he spends wandering, searching for something worth doing and getting wasted along the way.  In his search, Mick is driven to live life only on his terms even if it leads to misery, emptiness and depression.  He struggles to find a place in this world, make a living wage in times of a horrible economy and constantly recalls childhood memories when times were easy and uncomplicated like fetching a beer for his Gramps.  He considers himself a moody Old Testament God who would, “stomp the shit out of my creations with sudden fury…” And just like many before him, Mick’s ticket to freedom is hitchhiking or driving a car to anywhere and everywhere.  Unable to deal with the world around him, Mick knows he can always depend on the road and a car to drive him off to somewhere far away where he can start anew.  He believes, “Nothing matters when you’re driving a car.  As long as there is enough in the tank, the whole world can go to hell.”  Anything is a possibility to Mick as he speeds around meeting people, pushing limits and taking chances.   It is truly a thrilling ride filled with ups and downs that even Mick knows he will never be able to live down.

McDaeth’s writing makes story telling seem easy.  He writes short, but impactful poetic sentences, which makes for a smooth and effortless read.  He has successfully written a humorous and witty tale that elicits many social distresses of the early 1980’s era and how many, like Mick, struggled to find meaning in and around all the, “gray gray gray of high civilization.

“Roads and Parking Lots might be the truest rendition of the 80s I’ve ever read.” p earwig 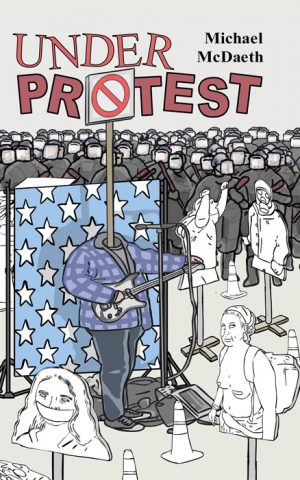 November 30th, 1999. An amateur filmmaker follows a protest singer through the streets of Seattle at the WTO protests. The protest singer, following his gut-hunches, zig zags along the edge of the protest talking to anyone and everyone along the way. He engages the willing and the unwilling with his question of the day, “What do you think of the protest?” Nearly everyone he meets ends up with a copy of his CD. A CD that contains only one song “A Bitter Wind is Blowing” a song he insists is, “The right song for the right time.”